The Scientific Serendipity residency program, initiated in 1999, culminated in 2001 with two Australian artists taking on residencies in scientific organisations.

During a residency at the Museum of Natural History in New York, Sydney/New York-based Justine Cooper assisted with the year-long Genomic Revolution exhibition, and also developed her work Transformers, which was exhibited in the 2002 Adelaide Biennial of Australian Art.

Justine also came very close to the event that dominates our collective memory of 2001. She remembers: “That year I also had a six-month studio space residency on the ninety-first floor of the World Trade Center, with a dozen other artists. At the Museum I’d been working on the Genomic Revolution exhibition, learning to extract DNA from saliva and also how to think about genetics conceptually and ethically, and helping set up their public Genome Learning Laboratory. That’s where the photo with Dr Jim Bonacum was taken. I think my husband Joey Stein took the photo. We met at the museum, so I can thank ANAT for that as well ;-)”

“After 9/11, in which I lost a colleague and also much of my work, I shifted the project I produced related to the World Trade Center. I’d read the sequence of Tower One’s office lights as if they were an autoradiograph, which is an old form of DNA mapping, and had synthetic DNA made from the sequence I mapped – so I ended up with a biological transcription of the absent building. The ANAT residency absolutely informed that work, which was called Evanition.”

Meanwhile Brisbane-based Adam Donovan spent three months at the Maritime Acoustics Division of the DSTO (Defence, Science and Technology Organisation) in Adelaide. The collaborative relationships he established with scientists there were instrumental in his development of ‘audio spotlights’ (ultrasound sound projectors) which, again, featured in the Adelaide Biennial the following year.

Read Justine’s description of the work. 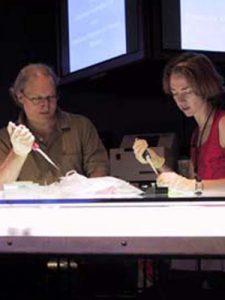 Justine Cooper with Dr Jim Bonacum during her residency at the Museum of Natural History, New York (photograph Joey Stein)