Stelarc is a performance artist whose work is conceptually-driven, incorporating different media such as prosthetics, robotics, biotechnology and the internet. He is interested, not in enhancing the human body, but in engineering and interrogating alternative anatomical architectures.

His projects and performances are aesthetic gestures to the possibilities of human-machine couplings. That is to say, how a body might operate with a third hand, an extended arm, a virtual arm, a prosthetic head, a stomach sculpture, an extra ear, a walking head, 6-legged walking machines and a full-body exoskeleton (to name a few).

Stelarc has been involved with ANAT since 1990, as a participant in ANAT Summer School, learning to use a 3D CAD software to design his Virtual Arm project, which was finally realised at the RMIT Advanced Computer Graphics Centre in 1992. This virtual arm was actuated with a pair of data gloves: the right glove generated mimicking functions, whilst the left glove had a gesture recognition control language to enable extended capabilities. A virtual manipulator for a virtual task environment. In performance, the physical body was augmented by a large projection screen that superimposed the actual and virtual actions. Later in 1992, he realised a performance for TISEA, where the body performed beside a large 3m industrial robot arm, actuating his virtual doppelganger with a Flock of Birds motion capture system. The industrial robot arm had a video camera attached. It was programmed to gyrate around the body, generating panning, tilting and zooming images which were projected and mixed on the large screen above the installation. Senses on the body generated sounds that registered the choreography of the body and immersed the audience in an acoustical landscape.

Known for his risky yet iconic performances, Stelarc’s most challenging early performance was City Suspension (1985), where he was suspended 60m above the Royal Theatre in Copenhagen. A stunning feat given his fear of heights. After 30m all the body could hear was the whooshing of the wind, the whirring of the crane motors and the creaking of the skin. This is but one out of the 27 body suspensions the artist has created. 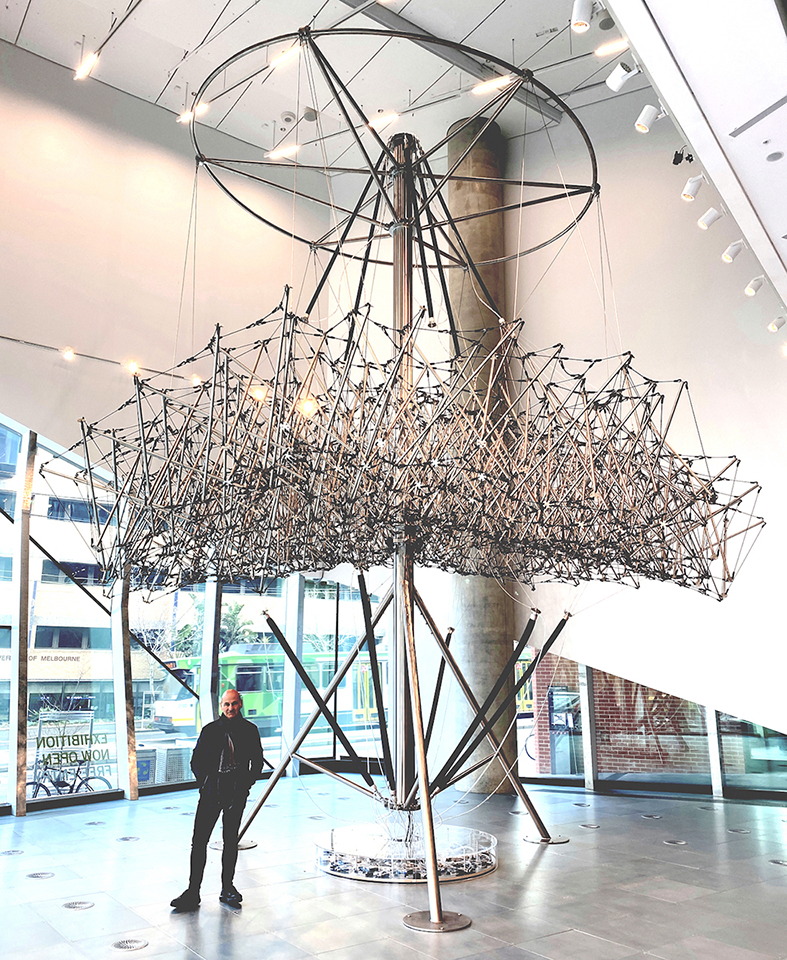 His most recent commissioned works include the Reclining StickMan, a 9m long, 4m high interactive robot, actuated by pneumatic rubber muscles for the 2020 Adelaide Biennial of Australian Art at the AGSA. Anyone, anywhere at any time could access the robot and remotely choreograph its movements. The Anthropomorphic Machine, an 8m high, 7m in diameter stainless steel and elastic cable structure, was completed this year in collaboration with Paul Loh and David Leggett for the SWARM exhibition at Science Gallery Melbourne. The machine is not figurative but certainly anthropomorphic, in that it has a deformable skeletal structure, rubber muscles, steel tendons, a circulatory system of air, a lung of pneumatic valves and a vision and computational system that detects the distribution and dynamics of people in proximity and beneath its tensegrity canopy; which determines whether it behaves with breathing, quivering, swaying or glitchy motion.

At the time of this writing, Stelarc is working on a soft robotic skin that both animates and deforms the body. The project is still in its early design stages.

Each of Stelarc’s works bring the extraordinary into the ordinary, breaking the boundaries of what we consider normal. Sometimes, it surprises even himself. As he remarked, “Ideas are easy, actualising them is the issue. I’ve made a career out of being a failure. Nothing turns out the way I imagined it…”

Having said that, his definition of art is that which happens in the slippage between intention and actuality, incorporating the accidental and the unexpected.