Troy Innocent describes his work Idea-ON>! (pictured) as exploring “ideas for virtual worlds inspired of the first wave of VR” at a time when “a VR headset and the hardware to run it would cost in excess of a million dollars. Not having access to this tech at the time, I created interactions that explored the endemic properties of electronic space by emulating the language of VR via playable CD-ROM experience”.

Through showing the work in the context of the Science Show Troy was able to observe “a range of different players experience the work in the different ways”, and this “became part of my creative research practice and an effective methodology for exploring possibilities afforded by interaction and game design”. Idea-ON>! was later released on the cover of Mediamatic and included in Burning the Interface exhibition at the MCA in Sydney.

Read more about Burning the Interface, the first major survey exhibition of works on CD-ROM by contemporary Australian and international artists. 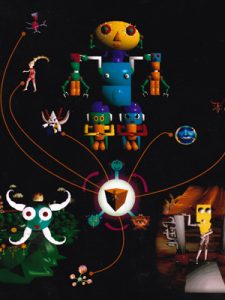