BORDERPANIC, held in Sydney in September, brought together artists, media makers and thinkers questioning the world’s geopolitical and metaphorical borders. It was initiated by Performance Space and curated by Zina Kaye and Deborah Kelly. As Deborah remembers:

“BORDERPANIC began as an exhibition and grew into a kind of festival (though that word lends a misplaced sense of festivity). Fiona Winning at Performance Space invited me to curate a cultural response to Australia’s disastrous refugee policies, which felt so urgent in the wake of Tampa, the ‘children overboard’ debacle, and the drowned hundreds who had perished when the SIEV X sank. I asked Zina Kaye to work with me, and she brought with her an association with Amsterdam’s Next 5 Minutes festival, which we became an arm of.”

“Over nearly a month we pulled together: an exhibition featuring wildly diverse artworks – from coffee-on-tin imaginary landscapes by asylum seekers incarcerated in Villawood detention centre to Hossein Valamanesh’s iconic burning carpet (pictured) – which was accompanied by a video screening and presentations at Performance Space; a tactical media lab and symposium hosted by the Museum of Contemporary Art; a forum at Metro Screen; a sprawling website; a little book; workshops; and a postcard competition held in conjunction with Avant Cards.” 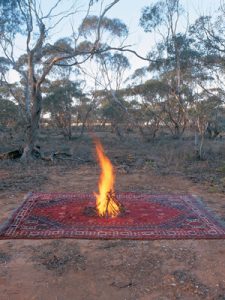