Until now ANAT’s Emerging Technology Labs had focused on introducing the skills associated with emerging technologically-based practices to Australian media arts practitioners, writers and curators, but in 2007 the reSkin wearables research and development laboratory, presented at ANU in Canberra, extended the reach to include design and craft practitioners such as jewellers, fashion designers and object makers.

Twenty national and international artists and designers investigated the dynamic field of wearable technologies over a three-week intensive period, under the guidance of international leaders in the field Joanna Berzowska (Canada) and Elise Co (USA), while national facilitators Susan Cohn and Cinnamon Lee were assisted by sound artist Alistair Riddell and media artist Stephen Barrass to cover the diverse skill bases associated with the field and informing the development of the lab.

The lab was hugely popular with participants, facilitators and project partners alike. According to facilitator Joanna Berzowska, the high quality prototypes developed during reSkin heralded the advent of a ‘third wave’ in the field of wearable technology, in which the conceptual resolve and use of applicable materials technologies was, for the first time, married with high-end craft and design skills. 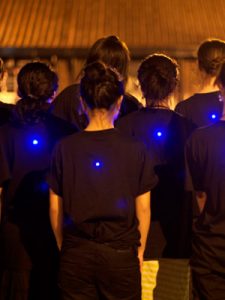