In the new millennium, Alchemy International Masterclass for New Media Artists and Curators brought together 58 tutors, participants and curators—from Australia and overseas—in an intensive three-week workshop combining performance, internet, sound, video and multimedia. Alchemy, which evolved from ANAT’s successful Summer School model and ran from May through June at Brisbane’s Powerhouse, was one of the largest projects ANAT has mounted to date. In many ways it set a benchmark for the organisation, by expanding its brief to incorporate a wider diversity of artistic practices. With artists having developed complex skill bases, ANAT now aimed to offer training environments which explored advanced uses of technologies within the context of developing ideas, artforms, concepts and projects.

Charity Bramwell, then a staff member at ANAT, recently unearthed two rolls of 35mm film taken during Alchemy that had never been printed! She got it processed (luckily that’s still possible!) and we sent scans of the prints to ANAT’s then director Amanda McDonald Crowley to jog her memory. Her response was:

“Oh goodness! I could tell so many stories from these images! What an absolutely amazing group of people!! I just think of all the astounding things everyone … went on to achieve! … I could tell you the names of everyone in that picture; and I’ve still got the serving bowl those guys gave me as a gift that night: I made shared meals a big part of Alchemy, so that’s how they thanked me … You just sent me down a wormhole of memories!”

“Oh yeah: it was life changing for many of the participants. I can attest to that. Myself included. I could go on and on, but some examples:

Shilpa Gupta was a web developer by day and a sculptor in the studio until she met John Tonkin and thought about data and art.

Sophea Lerner was so overstimulated she joked she had to eat Deb potato in the evening to keep her balanced.

The meals prepared by participants were amazing. Mervin and RPD’s Carribean Feast was the bomb.

Jo Law’s Japanese meal was delish, and the Indonesians knocked it out of the park.

Sara Diamond had the group turn the entire building into a game space.

Mari Velonaki and I exchanged our clothes in Sophea’s sound installation in the elevator.

Mongrel’s offline NINE became the online project Linker (that they later realized at de Waag), because their work in Indigenous communities led them to understand that interconnected stories, not just interactive stories, should be essential to the project.

I can’t remember who was projecting Morse Code on the front of the building – but no-body wanted to show their work in the galleries: it was on everywhere else in the building.

Bruce Gladwin said he couldn’t stay more than a week, but I said no-one could attend for that short a time, and I am going to say that Back to Back’s work became even more expanded as a result of his attendance.

Mike Stubbs hung out an extra week so he could teach as well as participate.

Alexei Shulgin performed his 386dx one Friday night at one of our community gatherings – and he’s about to perform it again this month at the New Museum in NYC as part of Rhizome’s Net Art Anthology program series.

I BBQ’d every Friday night on the deck and locals came by.

Graham Harwood always joked that I wanted a six-week-long party with brilliant friends from all over the world as my ANAT swan-song.” 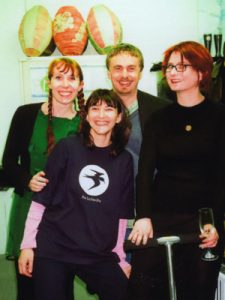