Wendy Mills remembers the exhibition as “a productive follow-on from the summer school, in that it showcased a new direction that artists were exploring” and “reinforced a feeling of optimism in the potential for using computers in the arts”.

On a personal note, Wendy feels the summer school and exhibition helped her shift the direction of her practice “from ‘real world’ installations to digital constructions and interactive artworks”. It wasn’t all good though, as back then, the equipment required to produce and show these works was still very expensive. Wendy had had to raise funds to produce her work, but during the exhibition equipment used in various artworks was stolen from the gallery. “The sound element of my work, which had been recorded live for the exhibition, was on a master cassette tape. This tape was stolen along with the cassette player, and never heard again.”

That year, ANAT also organised a delegation to SISEA (the Second International Symposium on Electronic Art), which was again staged in The Netherlands. 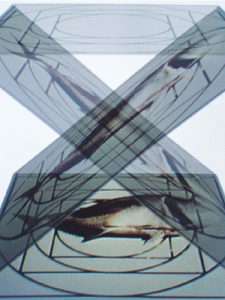