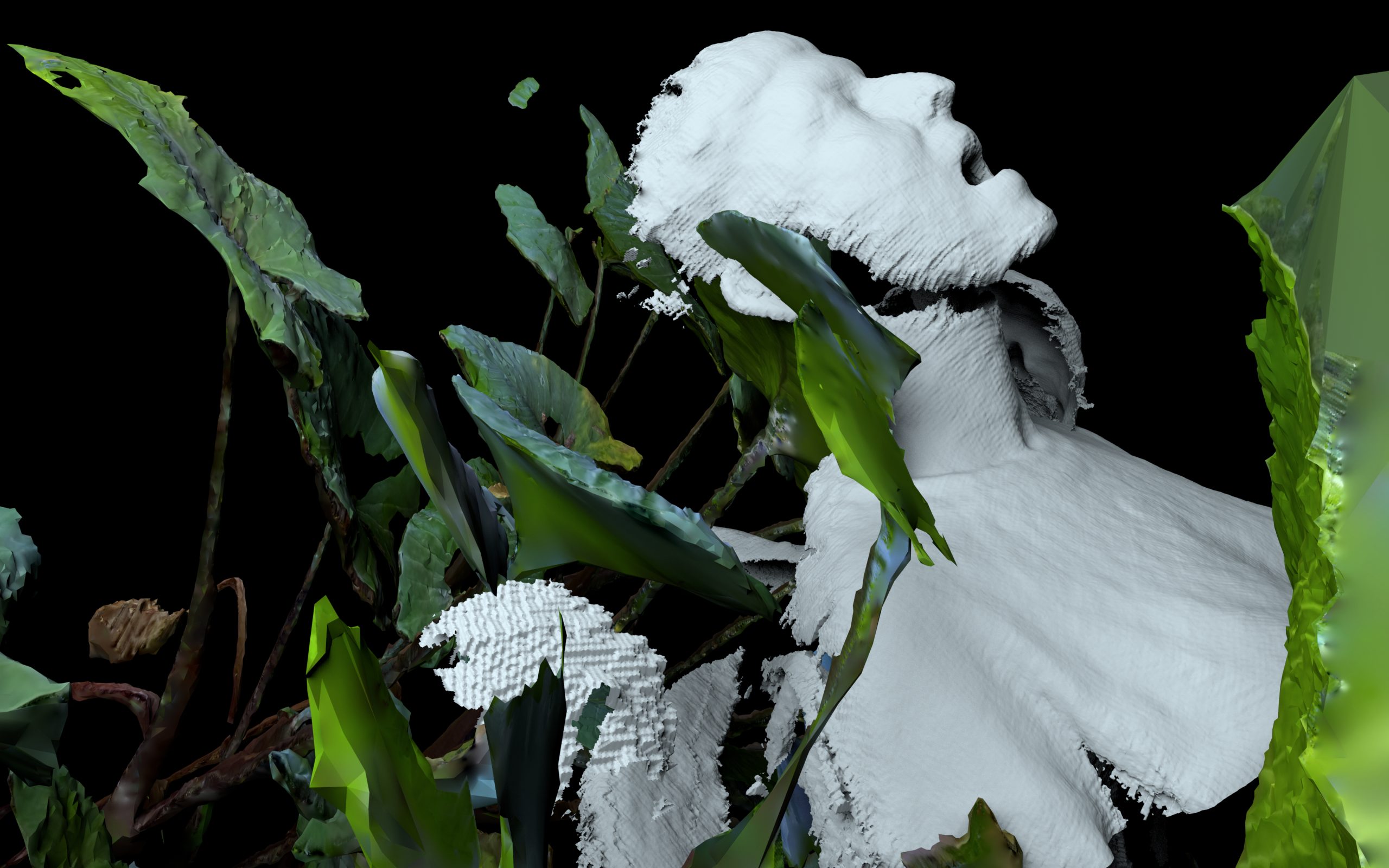 Phoebe: And I am Phoebe.

Naomi: And today we’re actually talking to Yandell Walton, and this is a part of our ANAT series where we’re talking to our Ideate recipients. So welcome to the show.

Yandell: Thanks for having me.

Naomi: That is our pleasure. So there has been a number of different recipients. So this year because the regular conference couldn’t happen, funds were made available for a series of different residencies. Do you want to tell us a little bit about yourself as a creative practitioner?

Yandell: Yeah, sure. So I’m a Melbourne based artist. I work predominantly with moving image projections in kind of non-traditional or public spaces. I’m often creating very immersive works in an aim to really connect to the viewer. My work investigates ideas around impermanence, predominantly in relation to our shifting environment due to climate change.

Naomi: Some pretty big themes there. I mean, as a creative practitioner myself, I love immersive works. I find them really fascinating and I am looking at an image on your website, and I think that it’s water that’s all around the person. 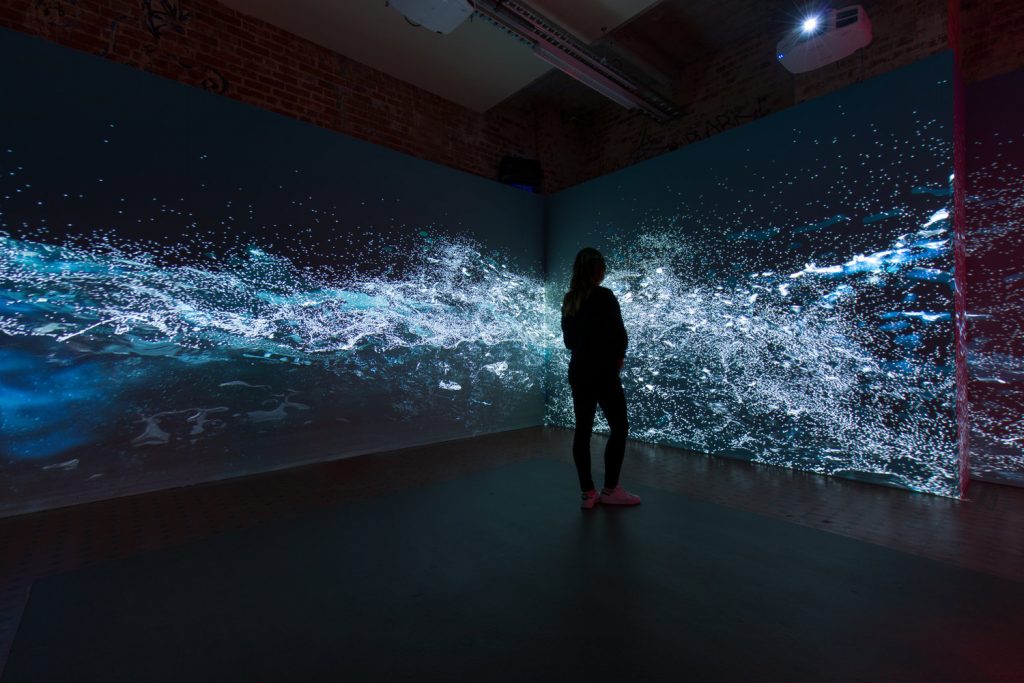 Yandell: Yeah, so that was a major work from my solo exhibition at the Substation in Melbourne last year. And that was a fully immersive kind of projection installation, so four channels. That was basically like a massive wave that engulfed the space. So it was intended to really immerse the viewer and create quite an emotive response through the visuals and sound. There was sound design as well.

Naomi: That was going to be my very next question, so thank you, because I can see the picture, but I’m not looking at the moving image, it’s just a still shot, taken of someone within the space. So I would actually love to hear a bit about what you would be doing for, or what your proposal was for your research for the Ideate residency.

Yandell: Definitely. So over the last six months, I have embarked on a research project through the Philip Hunter Fellowship, pretty much researching or locating ecological shifts in forests in Australia due to human impact. And I have also been doing some practical research and development using photogrammetry techniques to capture the natural environment as volumetric scans. So that’s kind of been happening throughout this whole lockdown period, which I feel really grateful to have the time to investigate these new ideas and new modes of working. So the Ideate project will really allow me to work out new processes, or new workflows to enable these 3D scans to be animated.

Yandell: And basically, I’ll be using motion capture technology with the human form to introduce actual human movement to the plants and trees. To kind of create this cross-species form. So yeah, it will really, I think over the next four months it will be really developing these workflows, playing with the technology, really working out how we can do this.

Naomi: Yeah, so I when I read it, I was like oh yeah, introducing human-like movement. And then when you explain it that way, I’m like oh, that is going to be really fascinating, seeing those objects that are normally affected by wind, rain etcetera, then acting, or looking like they’re moving in a human-like way.

Yandell: Yeah, and I suppose, I’m not sure exactly how it’s going to look, but I’m really interested in doing it, because I suppose it’s come out of researching the roles trees and forests have, and how human impact is changing this. Like for example, looking at the influence climate change has on contributing to wildfires like we saw earlier this year, and how these sorts of fires then contribute to major CO2 emissions as well as deforestation for example, like we see in some of the world’s largest rainforests that usually act as carbon sinks. All of these kinds of things have been coming up, and I don’t know, I feel like as humans, our connection to the natural environment goes more and more distant. So I was kind of like asking myself, how can we then reconnect to the landscape? So then the idea of merging the human and the organic came about as a kind of playful speculation, I suppose.

Phoebe: So other than the bushfires, are there any other trends that you’ve noticed that have been from human impact?

Yandell: Yeah, well deforestation in some of the largest rainforests, like the Amazon.

Naomi: Are there any particular areas that you are focusing on here in Australia for your research project? Is there an area that’s close to your heart that you are concentrating on?

Yandell: Yeah, I mean I grew up a lot of my childhood in the Daintree Rainforest actually, so that is very close to my heart, and I’ll definitely be capturing that landscape at some point. So I’m hoping that through Ideate, I really obtain a really great workflow to understand how I can use this technology. And then I think next year I’ll kind of embark on the project itself that will kind of visit many sort of locations, doing field trips to capture natural landscape, including places like Daintree Rainforest and other landscapes.

Naomi: I guess when you’re embarking on these new style of working that there is quite a lengthy upskilling and learning of the new way of processing the data that you need to sort of fulfill all of that information first before then you can start the project proper.

Yandell: Definitely. And it’s baby steps. Like I feel like I have been researching and developing for six months in isolation, so have heaps of time, but it’s been slowly, slowly, slowing working up. Like for example it was really important for me to be able to use accessible technology as well as technology that is more specific, like LIDA scanning imaging technology, but also things that are accessible, like my iPhone, to capture a photo set and then process using photogrammetry software to create the volumetric scan. So it’s kind of very much then using what’s available to me.

Phoebe: So you mentioned as well that you’re living in Melbourne, so has the lockdown for COVID 19 hindered your art practice, or has it been able to liberate you because you’ve been able to spend more time at home to be able to potentially work on it?

Yandell: Definitely I think that unfortunately some very amazing projects were postponed or cancelled due to COVID, but it’s allowed me now to have this precious time for development and research that is so difficult to get as a working artist, because I’m constantly doing project after project, juggling projects. So it’s been amazing, just to have time for development and reflection and research. It’s been great.

Naomi: Finding the silver lining of the whole experience.