We asked the artists:

In 2021, each artist will look into the next steps for their projects – watch this space!

Read their ANAT Ideate 2020 experiences below. 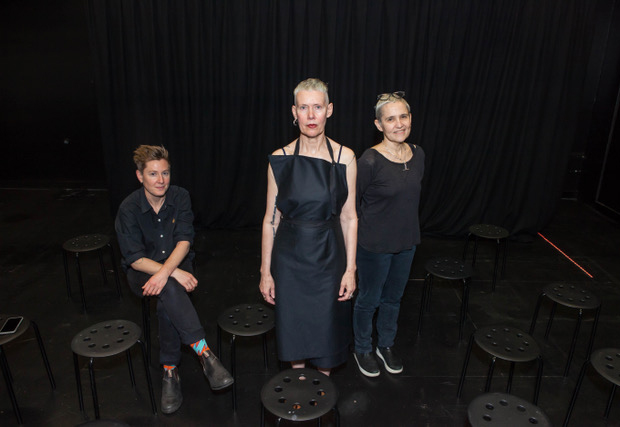 ‘BoneDirt’ is exploring human attunement with the more-than-human, specifically with geostrata: rock, ground, dirt. Their ANAT Ideate project is seeking to develop technologies and speculative strategies for deep listening to and with the geological, to open out our possible relations with these more-than-human familiars. 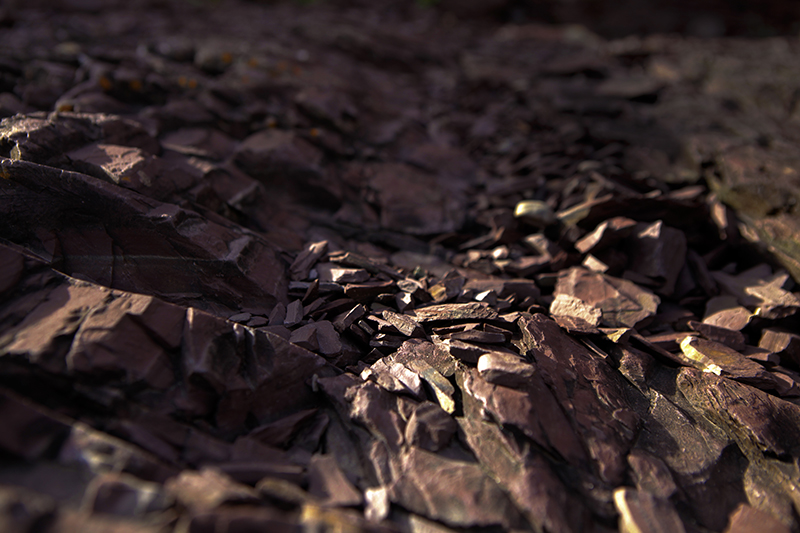 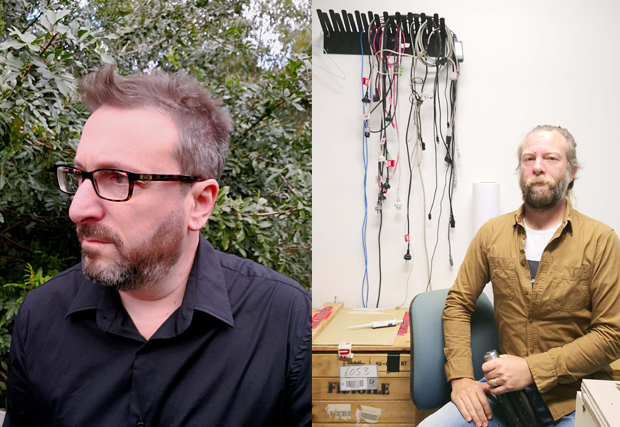 Developing the concept of ‘In-Vitro Intelligence driven Surrogate Performer’ – a bioengineered entity that has direct biological links to its donor and embodies the abilities to perform, the proposed project explores the possibilities of bioengineering organoids as the ‘input’ mechanisms for Surrogate Performers such as the auditory and visual senses. 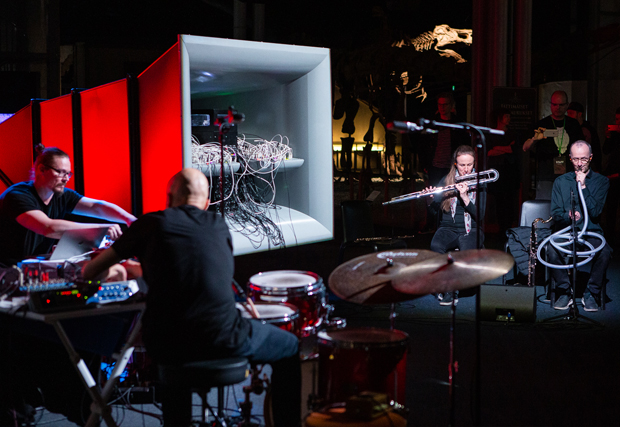 Station: Radio Adelaide 101.5 FM
Program: Festival City 2 September, 2020
Guy Ben-Ary & Nathan Thompson are Perth based researchers. They currently work at SymbioticA, UWA. They have been collaborating for the past 6 years and are recognised internationally as innovators working across science and the media arts, specialising in biotechnological artworks aimed to enrich our understanding of what it means to be alive. Their main research area surrounds cybernetics, biological robotics and the cultural articulation of these technologies. 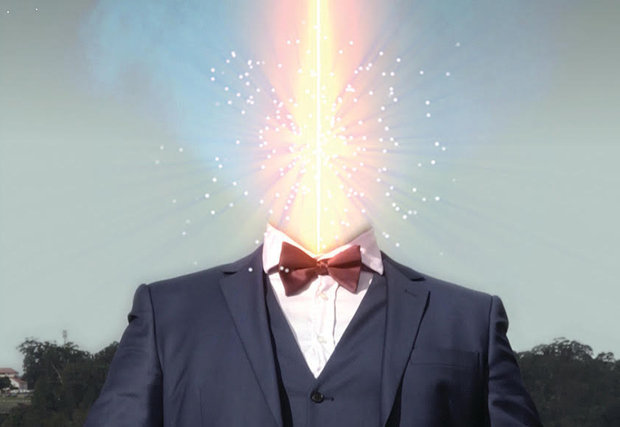 A robot in the garden: technological ecosystems as sustainable artworks.
The research project will investigate how art and technology can claim new space for creative expression by intersecting and diverting the fields of Field Robotics and Agriculture Technology into innovative artistic pathways. 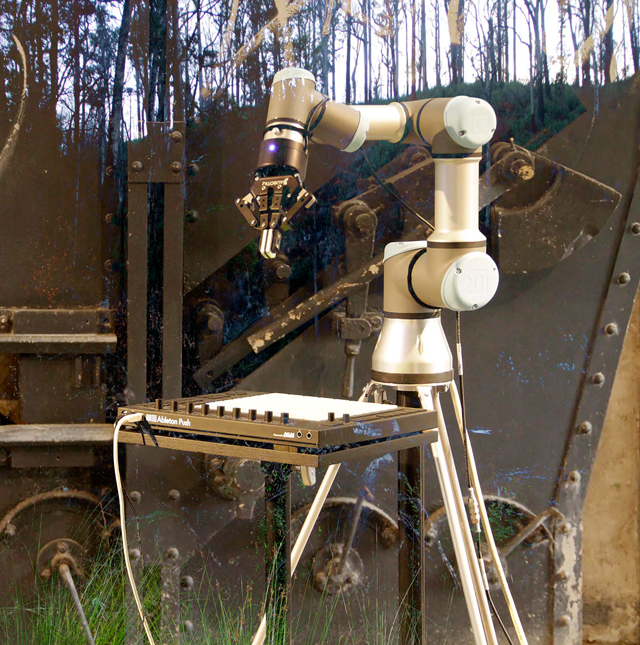 Dr. Wade Marynowsky is an artist, academic and researcher working across robotics, immersive and interactive performance and installation. His main body of research explores the notion of robotic performance agency by challenging notions of classical spectatorship and performance. His practice is characterised by large-scale robotic, sound, light and interactive works that combine humour, camp and a host of unnerving thematics to absorbing affect. 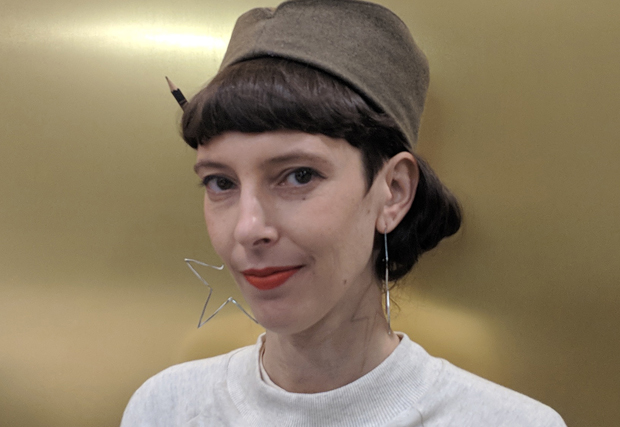 Body politics describes how the powers of society regulate the human body, and the struggle over individual versus social control of the body. Andrea will take this notion and use it to explore emerging nanobiotechnologies through her nanoart and media art practices.

Andrea Rassell, Still from The Society of NanoBioSensing, Scanning Electron Microscopy image of prostate tumour cells with ZIF-8, a nano-engineered material that acts as a gene delivery system and cancer therapy for specifically targeted cells.

Andrea Rassell is a media artist and interdisciplinary researcher in science art. Working in nanoart—artforms that engage with nanoscience and nanotechnology—she creates experimental films and moving image installations that explore scale, technological mediation, and the multisensory perception of the sub-molecular realm. Her work has been shown at the New York Imagine Science Festival, Oaxaca FilmFest in Mexico, the New Zealand International Film Festival, White Night in Australia and Sónar+D in Spain. 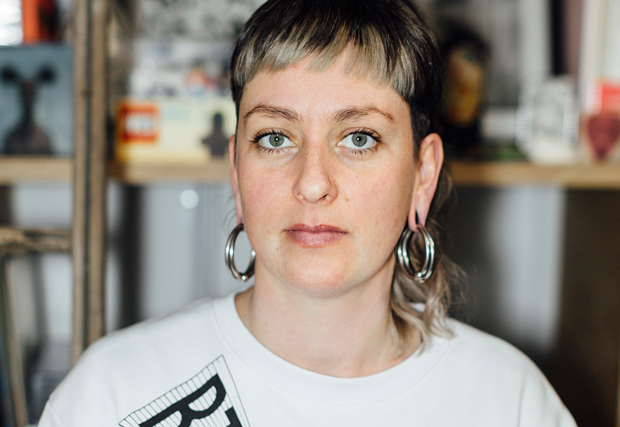 Yandell will embark on new research through Interrogating technological processes to enable volumetric scans to be animated, introducing human-like movement. Emergent technologies will be harnessed to merge the natural environment with human movement in an aim to create a cross species form.

Yandell says she’ll ‘be using motion capture technology with the human form to introduce actual human movement to the plants and trees. To kind of create this cross-species form. ‘Over the last six months, I have embarked on a research project through the Philip Hunter Fellowship, pretty much researching or locating ecological shifts in forests in Australia due to human impact. And I have also been doing some practical research and development using photogrammetry techniques to capture the natural environment as volumetric scans. So that’s kind of been happening throughout this whole lockdown period, which I feel really grateful to have the time to investigate these new ideas and new modes of working. So the Ideate project is allowing me to work out new processes, or new workflows to enable these 3D scans to be animated.

Yandell Walton is a Melbourne-based artist whose work encompasses projection, installation, and interactive digital media. Through work that melds architectural space with the projected image, Yandell has become recognised for her public projection works that merge the actual and the virtual to investigate notions of impermanence in relation to environmental, social and political issues. Exhibited nationally and internationally in galleries and non-traditional public spaces, Yandell has received grants to travel overseas from the Australia Council (2006 & 2008) and the Ian Potter Cultural Trust (2015), to undertake residencies and exhibit site-specific works in Berlin, Germany (Transit Lounge, 2007), Florida, US (Digital Graffiti, 2015), and New York, US (The Gershwin Hotel, 2009 and The Centre for Holographic Arts, 2015). 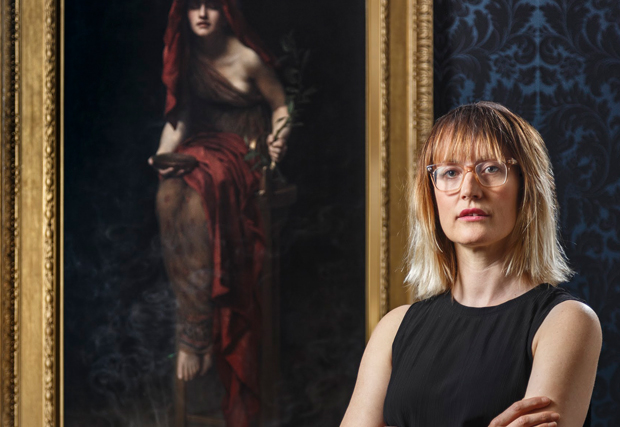 Willoh works on the lands of the Muwinina people, Nipaluna country

Drawing inspiration from the ‘90’s phenomenon of the Tamagochi and looking through the lens of queer theory ‘My Thing’ is a body of research that looks into the possibility for art and technology to transform our experience of intimacy by re-imagining the role of the digital companion. 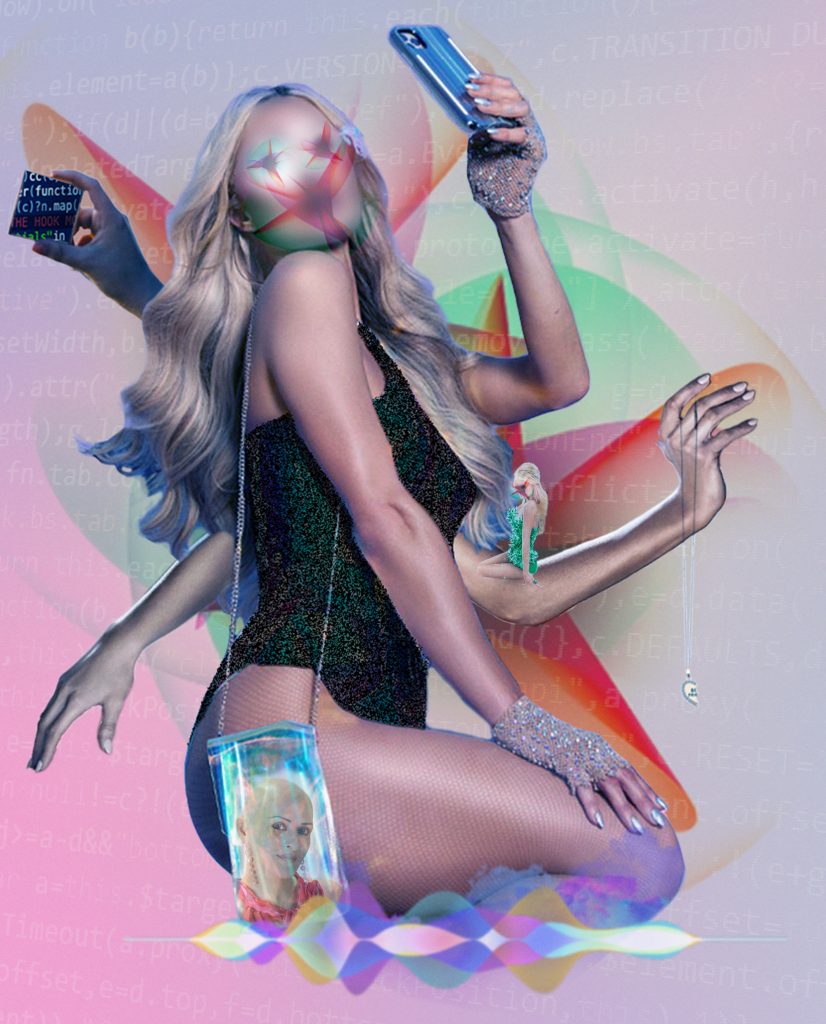 “I think we’re in this special moment in history”, says Willoh “where our relationship with our technology is oscillating between fulfilling this deep emotional need in ourselves to connect and to be with other people, and also just being like deeply annoying because we have to be on it all the time and we’ve all got Zoom dread, and we’re all going oh, another thing.”

In her *research text Willoh excavates the ambiguity of the term ‘companion’…
*Strong language warning
*”The relationship with the object is allowed by its inanimateness to be unbalanced- to support the power of the owner. It places no constraints on their engagement. In our relationships with them- they tell us about our own capacity for care and they allow us to explore it without judgement. We can feed and clothe our latex babies, we can prop our realistic sex doll in an armchair and tell her stories and then ignore her, we can fuck ourselves with our dildo’s for days on end. Even the fit-bit or other health tracker devices- though not marketed as companions- in a world where health and beauty are inextricably linked feed back to us details about our self-care and self-love.

The Tamagochi alone is unique in its demands.” 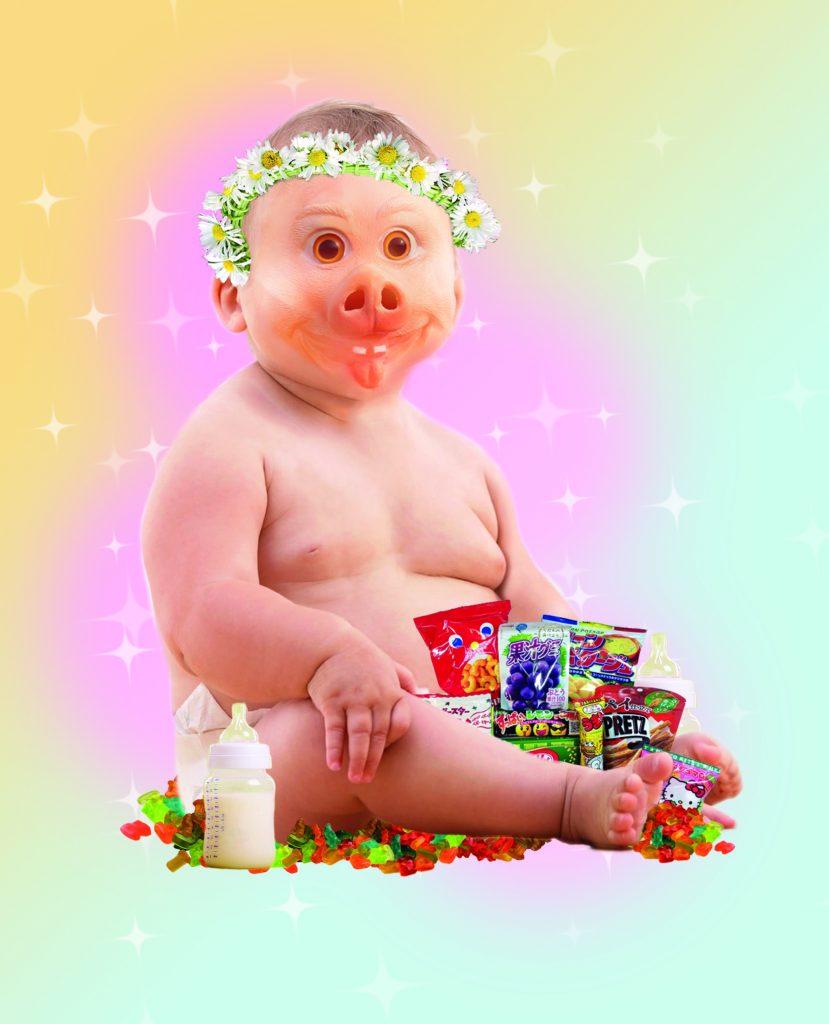 Radio Adelaide’s Festival City Producer, Dr Naomi Hunter talked to ANAT Ideate resident Willoh Weiland about My Thing, a body of research looking into the possibility for art and technology to transform our experience of intimacy, by re-imagining the role of the digital companion. Willoh’s residency draws inspiration from the ‘90’s phenomenon of the Tamagochi, looking through the lens of queer theory.

Willoh S. Weiland (b.1980, Seine Bight, Belize) is an artist, writer and curator. Over the last fifteen years Weiland has created large-scale performance works and art events, both independently and as Artistic Director of artist-led experimental arts organisation Aphids (2010-2018). Collaboration is a vital element of Weiland’s work and themes such as feminist politics, science and the mediating impact of technology recur throughout her practice. She has recently presented new work as part of The National, Museum of Contemporary Art, Sydney (2019) and the Adelaide Biennial of Australian Art, Art Gallery of South Australia (2020).